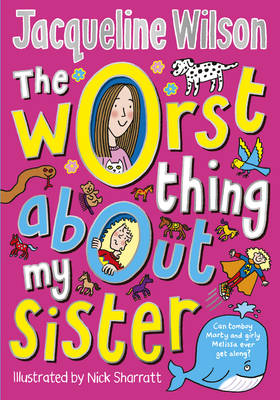 I loved hearing Jacqueline Wilson’s story: the struggle to find a quiet place to write in her flat as she grew up, her love of a new notepad and pen from Woolies, the challenge of actually finishing a story. She had a massive stroke of luck as a teenager and got her first job, miles away from home, working for DCThompson, writing for magazines. Did you know that, as the youngest journalist  on the staff at the time, DCThompson named their new magazine, Jackie, after her?

Wilson talked a little about her new book, The Worst Thing About My Sister

, sharing details that got it flying off the shelves of the book stall after the show. Everyone who has a sister will understand the passions raised by issues such as ‘you took my eyeliner’, and this book looks at the story of two very different sisters forced into one bedroom when their mums starts a business from home!

More than hearing about the book, I really enjoyed the details of Wilson’s life; how she slept on a camp bed in a linen cupboard for the first three months of her time in Glasgow until a bed came free at the hostel; how she became a mum relatively young and shared that writing was the perfect job for a mum – I agree! She is warm and genuine on stage, a born storyteller, even if one of her English teachers used to tell her off for her use of slang.

If you see an opportunity for an afternoon with Jacqueline Wilson near you, and you have a daughter, do go along. And if you like her Sapphire Battersea books, you’ll be glad to know not only is she working on the third one, she thinks there might also be a fourth one.