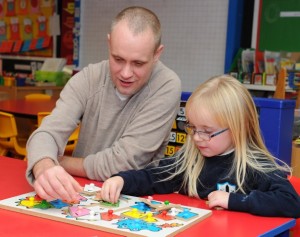 A groundbreaking new parenting skills course aimed exclusively at fathers has registered a 100% success rate with its first intake.

Stirling Council’s Mellow Dads’ programme, run by the Positive Changes team, is the first one in the country aimed exclusively at improving relationships between fathers and their young children.

The first five dads who took part in the 14-week course all completed it with flying colours and would recommend it to others. Average completion rates for similar courses run at around 60%.

Set up to help fathers who may not be coping with the stresses and strains of looking after a young child, the early intervention initiative is designed to help develop stable, successful family environments for children from all backgrounds.

The day-a-week sessions involved recorded interaction between dads and their children, joint learning and play activities and group discussion and review sessions about what it meant to be a good parent.

The group explored some of the challenges and responsibilities of what it is to be a parent and looked at how small changes to their own behaviours could make them better dads.

Christopher Perkins from Throsk attended the group with his daughter Toni Louise (5) after being signposted to the group via his daughter’s local nursery in Fallin.

“Being a dad can be quite isolating. Most of the contact I have with other parents is with mums at nursery or at play areas. I never really had the chance to find out from the experiences of other dads – that’s why I was interested in getting involved with the group,” he said.

“It’s really given me more confidence in my relationship with my daughter. After hearing from other dads in similar circumstances I know now that everyone has similar problems no matter where they are from.”

The dads were asked about their own experiences of childhood and how that shaped their attitude to being a parent and the way they interacted as a family.

Steven McGeogh from the Raploch also attended the course and found it really helpful in changing his own relationship with his daughter Lilly (3).

“I was sceptical at first but wanted to join for the sake of my daughter. I come from a large family and thought all you needed to know you got from your own, but I think it has been really good. Just listening and talking with other dads there is always something useful you can pick from other people’s experiences,” he said.

“Everybody contributed to the conversation. Things like the importance of outside play I didn’t even think about and taking Lilly to the library is now something I enjoy. Before, it would never have crossed my mind.”

Council Leader Johanna Boyd said the Mellow Dads programme was another element of the Council’s overall early years strategy to build a nurturing and supportive environment for young children, no matter their backgrounds.

“Early years learning is so important for children, and it’s vital that parents understand this,” she said.

“This is a real groundbreaking programme giving dads who might have been having some issues dealing with being a new parent support to help them give their children the best possible start in life by developing better relationships with them.

“Families that interact together positively are far more likely to offer a stable and supportive start for children, which is the platform we need to help build to give them a better chance of success in later life.”